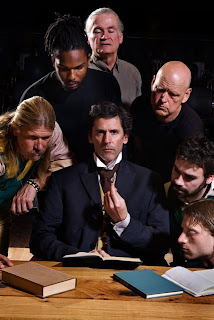 Compelling staging is highlight of ‘OPEN MIND FIRMAMENT’ at CPT

Raymond Bobgan, the artistic director at Cleveland Public Theatre, is at his best when he is confronted with material that requires innovative staging. Several seasons ago, his ‘BLUE SKY TRANSMISSION: A TIBETAN BOOK,’ was nothing short of brilliant.

For his banner offering this year, Bobgan has chosen to take an esoteric theatrical piece, ‘OPEN MIND FIRMAMENT,’ in which he stages a series of William Butler Yeats, “unstageable plays,” and creates a visually compelling piece of theatricality, poetry, singing, and dance. As someone said on the way out of the performance, “I didn’t understand much of what was going on, but I sure liked what I saw.” How’s that for parallel opposites?

Most people know Yeats as one of the greatest English-language poets of the 20th century, but he also wrote prose, plays and was a politician. He received the Nobel Prize for Literature in 1923. He was one of the founders of the Irish National Theatre Society and in the early 1900s, worked as the theatre’s director, writing several plays which were staged there.

Several clues for understanding ‘OPEN MIND FIRMAMENT’ include an awareness that Yeats did not appreciate European realism of the prose, poetry and theatre of the late 19th and early 20th century. He wrote plays and poetry like impressionists and cubists painted…illuminating feelings with an eye for underlying thoughts and images, not reality. He had a strong interest in mysticism, which also rears its head in FIRMAMENT.

Yeats wrote a series of six plays about the Irish Heroic Age. At the center of the plays was Cuchulain, an Irish folk hero who had great strength, a raging temper and strong sexual urges. The style of the scripts centered on the Japanese Noh theatre, which encases much symbolism, rich poetry and stylized body movement. In writing these plays Yeats enhanced the Cuchulain stories by weaving in his own life experiences.
In ‘OPEN MIND FIRMAMENT,’ Barton Friedman, Yeats scholar and former faculty member at Cleveland State University, took the poet’s concept and refined it. Bobgan, in staging the script, further adapted it.

Viewing the production, which is dedicated to Friedman, is a fascinating experience. Bobgan’s imagination runs wild. He takes a complex story and makes it a visual cacophony of sounds, movements and sights. Ladders magically stand without support, and are used to weave actors and ideas through a flow of precarious movements. Water flies freely to anoint. Chants set moods. Every part of the theatre, which has been transformed into a series of platforms, levels and ramps, is used.
Actors sing and emote above the audience’s heads, besides them, and even verbally confronted the attendees. The story is told by a scholar (maybe Friedman, himself), the poet (Yeats) speaks, and Cuchulain’s life (and that of Yeats) is acted out.

Though the audience, most of whom probably do not know the Chuchulain legends, may be confounded by the avalanche of names, poetic illusions and immense amounts of material being presented, the general ideas do come forth and the staging is so fascinating that even without grasping the total meaning, the whole experience enfolds the participant in the journey.

This is a cast show. Though some individuals have more lines, the entire cast works as a unit. They are all an integral part of the complex movements and sounds. Bobgan has molded them into a cohesive one.

It is difficult to point fingers at any of the performers, but special recognition must be given to Rett Keyser who is mesmerizing as Poet (Yeats), Raymond McNiece who populates the personage of Cuchulain and John Stuehr who leads us on the journey as the Scholar.

Trad Burns’ lighting aids us on our journey. His set design, a massive undertaking which transformed the theatre from a proscenium to a theatre-in-the-square, is impressive and adds to the entire experience. Richard Ingraham’s sound design leads us through many scences.

Capsule judgement: ‘OPEN MIND FIRMAMENT, AN EVENING OF W. B. YEATS’ is a fascinating experience. Don’t’ be put off by what might appear to be an abstract creation. Clear and single-minded understanding was not Yeats purpose. Go and be swept up by Raymond Bogan’s fertile imagination which paints his expressionistic images of the conception of Nobel Prize winning W. B. Yeats and scholar Barton Friedman.
Posted by Roy Berko at 1:57 PM