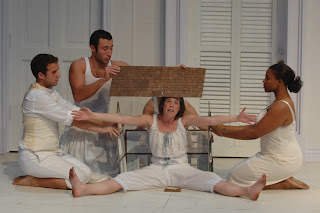 Three years ago Matthew Earnest, who is now directing ‘ALICE’ at Porthouse Theatre, staged a version of ‘OUR TOWN’ which stuck to the Thornton Wilder’s original intent, but framed the production with a creative and contemporary style.

Last year Earnest’s directing genius was displayed with the inventive and audience-appealing ‘PETER PAN.’ This year, the Roe Green sponsored Visiting Director at Kent State University, is staging a fantastical, psychedelic journey into Wonderland. This is not your traditionally staged ‘ALICE IN WONDERLAND.’ It is a visually enchanting production, with amazing costumes and some interesting original music.

Earnest, besides directing, also adapted Lewis Carroll’s ‘ALICE’S ADVENTURES IN WONDERLAND’ and ‘THROUGH THE LOOKING-GLASS.”

‘ALICE'S ADVENTURES IN WONDERLAND,’ which was published in 1865, is a surreal work of literary nonsense written by English author Charles Lutwidge Dodgson under the pseudonym Lewis Carroll. It tells the story of a girl named Alice who falls down a rabbit-hole into a fantastic realm populated by peculiar and anthropomorphic creatures.

The tale is filled with allusions to the author’s friends and enemies. It has been examined from many perspectives…as an attack on the British educational and social systems, as a world looked at through a drug haze induced by eating hallucinogenic mushrooms, and as a mathematical puzzle. Some just regard it as nonsense which intellects attempt to make into sense and reality.
Whatever, it is a lasting piece of literature which has been the subject of plays, movies, cartoons, and television adaptations.

Whether you do or don’t gain a message from Porthouse’s ‘ALICE’ is almost irrelevant. What you will gain is an appreciation for creative staging, excellent performances, and how a script placed in the hands of a very competent director can become exciting theatre.

The cast, most of whom play multi-roles, is uniformly excellent. Especially endearing is Emily Pote. The talented young lady who played Emily in ‘OUR TOWN’ and Wendy in ‘PETER PAN,’ at Porthouse is a waif who lights up a stage. She is utterly charming as the now tall, now short, now energetic, now pensive Alice.

Nick Koesters, he of mobile face and good comedy timing, is especially effective as the Cheshire Cat and the White Knight.

The original music by Cocteau Twins and Thomas Dolby adds a dimension to the production. Pat Johnson’s costume designs may be the overall hit of the staging. His creativity in making enchanting illusions out of daily household goods is astounding. Scenic Designer Steve Pauna adds much with his white-on- white multi-doored set. Matthew Earnest’s choreography also adds to the delight, as does T. C. Kouyeas Jr.’s lighting.

JUDGEMENT: ‘ALICE’ is one of those special productions which is a joy to experience. Matthew Earnest has fast become one of my favorite directors, gaining respect for his creativity and ability to craft lasting illusions. Bravo! Bravo!
Posted by Roy Berko at 10:32 AM