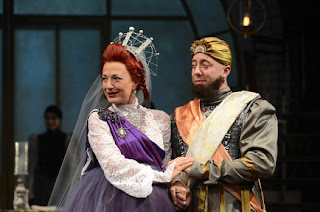 Shakespeare’s THE WINTER’S TALE, now on stage at Great Lakes Theater, centers on jealousy, a false accusation, deaths, banishment and reuniting.  The plot, was taken from Robert Greene’s pastoral romance, PANDOSTO.  The Bard made some minor changes, mainly giving the script a happy-ever-after conclusion.

The story, which takes place in Sicilia and Bohemia, finds King Leontes accusing his wife, Hermione, and his friend, Polixenes, the visiting King of Bohemia, of having an affair.  The pregnant queen, shortly after giving birth to a girl, “dies” (the quote marks, as you will be aware if you see the production, are important).  The baby (Perdita) is sent into exile.  Shortly after, the young prince (Mamillius), dies of grief, leaving Leontes without an heir to the throne.  Through a series of mythical instances, a statue of Hermione comes to life, Perdita, who has been saved and raised by a dim-witted Bohemian shepherd, returns with Florizel, Leontes’ son, and the friendship of Polixenes and Leontes is reinstated.

The title of the play comes from a speech when Mamillius, the royal heir warns, “a sad tale’s best for winter.”  This idea is re-enforced when we are alerted to pay attention to the words of children.

THE WINTER’S TALE is most commonly identified as a romance.  However some modern literary experts consider it to be a problem play because, as originally written, the first three acts have strong overtones of psychological issues, while the last two acts are comedic and concludes with a happy ending.  (Be aware that the Great Lakes production is compressed into two acts.)

It is this difficulty in clearly deciding on whether the play should and needs to stress the message, or should be played as farce/comedy, that may be behind the inconsistency of the GLT production.  Director Jess Berger, in spite of his impressive credentials as a leading Shakespearean director, doesn’t seem to have clearly decided which way to go.

The necessity to build the emotional aspects of the ideas, making sure that the lines have clear meaning, or stressing farcical double takes and broad exaggeration, seems to have gotten lost.  The development of the first and second acts are a total disconnect, leaving the audience to wonder whether they have just seen two separate one-act plays.

David Anthony Smith, as Leontes, starts out screaming and then has no place to go in developing what should be an increasingly maniacal march toward unbridled jealous rage, and destruction of his family. His portrayal lacks the necessary nuance. His point of dénouement, a plot requirement, never becomes clear.

Juan Rivera Lebron as the Old Shepherd who finds the abandoned Perdita and his son, Clown (Juan Rivera Lebron), don’t texture their performances, playing exaggerated buffoons, much to the delight of the audience, but not the benefit of the plot.

Lovely Kimbre Lancaster’s Perdita, is a clearly etched role. Handsome Miles Gaston Villanueva is excellent as Florizel.  They both exude the joys of youthful love.

Laurie Birmingham steals the show as Paulina, a member of the court, who plays an important role in the plot development.  This is a well conceived and developed portrayal, as is Lynn Robert Berg’s Polixenes.

David Barber’s art moderne set design, complete with its astrological implications, works well.  However, Sara Jean Tosetti’s costumes, much like the production, are confusing.  They are a blend of many styles, not helping in character clarity or idea development.

Capsule judgement:  GLT’s THE WINTER’ TALE is a disappointment. This is a difficult script to produce due to the many emotional and psychological levels which require a clear staging philosophy.  Due to the lack of focused directing by Jesse Berger, the production never sets a clear course and leaves so much of Shakespeare’s brilliance untapped.
Posted by Roy Berko at 1:51 PM 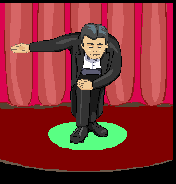 I really liked and agreed with your review of LOMBARDI [Cleveland Play House]. A 3-pointer out of 6 points is fair and pretty accurate.

Email ThisBlogThis!Share to TwitterShare to FacebookShare to Pinterest
Labels: Review of Reviewer's review