Eugene Ionesco, Samuel Beckett, Harold Pinter and Edward Albee are Theatre of the Absurd playwrights.  Unlike modern-movement writers like Arthur Miller, Tennessee Williams and William Inge, who wrote realistic plays which included solutions to problems or resolved situations, the Absurdists based their plays on Existentialism, asking, “Why do we exist?” but giving no answers.  Their writings are full of questions to ponder and probe.

Absurdist plays show people and a world out of kilter.  They shine the spotlight on the ridiculousness of life and situations.  Their plays are often confusing, hard to understand and challenge an audience to think.

Ionesco’s “Rhinoceros,” which is now on stage at convergence continuum, is a classic play of the genre.

The story, which centers on Bérenger, tells the tale of a man who is criticized for his drinking, tardiness and laid back life style.  We see him slide into paranoia and obsession as first one, then a herd of rhinoceroses, take over the town.  The herd, in reality, are those people who surround Bérenger and who fall for the “myth” of the rhinoceros as they become pawns to rumors and exaggerations.

Late in his life, Ionesco, the son of an ultra-nationalist Romanian father and a Jewish Sephardic mother who converted to Calvinism to fit into French society, indicated that the script was biographical.  Ionesco, who considered himself ethnically a Jew, though he didn’t practice the religion, found himself questioning how the Romanians had become so anti-Semitic, and how the Germans allowed Hitler to come to power.

The script is peppered with references that should easily stir present day viewers.  There are lines like, “Journalists are all liars,” and “Racism is one of the great problems of our times” as well as allusions to disdain for intelligent people, references to what are now termed “alternate facts,” negative allusions to immigrants, attacks against humanism, and illustrating the “great lie theory,” which states that if a lie is told over and over people start to believe it is the truth.

All of the characters, except Bérenger, talk in clichés, which are short, cryptic, use over-exaggerated adjectives which often lack proof, much like today’s tweets by Donald Trump.

Ionesco looks at reasoning and absurdity by exposing the limitations of logic and what motivates and explains the forces of the universe.  He uses the Rhinoceros allegory to ask, “what was the mentality that allowed a nation to succumbed to Nazism?”  In modern terms, why did many people succumb to the ethnic slurs and “Make America Great Again” sloganeering of Trump?

He uses the rhinoceros as a symbol of man’s inherent savage nature, while asking how humans are so absurd that they would allow the barbarity of World War II, or, in modern terms, why more didn’t rise up more strongly as Trump does not condemn the alt-right.

Yes, “Rhinoceros” was written in 1959, but has become one of the most produced scripts today as it examines the absurdity of the US in 2017.  Kudos to con-con’s artistic director Clyde Simon for putting such a relevant play on this year’s production schedule.

Staged in a black and white set and costumed in the same hue of colors, the play’s image is vivid.

Director Jonathan Wilhelm’s blocking is often creative, and the use of overlapping lines by characters on various parts of the stage adds to the absurdity.  Many lines were neatly primed for laughter, including, “How can it happen in this country?” which got an extended guffaw from the audience.

The cast, Tom Kondilas, Mike Frye, Kayla Gray, Joseph Milan, Natalyn Baisden, Rocky Encalada, David L. Munnell, Jeanne Task and Kim Woodworth, are uneven in their character development, sometimes stumbling over lines and not picking up their cues quickly enough.  This hopefully will right itself during the play’s run.

Capsule Judgement:  The con-con production, under adept directing by Jonathan Wilhelm, is a very long sit, but can be worth the effort.  Don’t go expecting a clear plot with a nicely wrapped-up solution.  This is an absurd play which is intended to make you uncomfortable and forces you to be introspective and examine the world around you as you ask, “Why do we exist?”

“Rhinoceros” runs through September 16, 2017 at 8 pm on Thursdays, Fridays and Saturdays at convergence-continuum’s artistic home, The Liminis, at 2438 Scranton Rd. in Cleveland’s Tremont neighborhood.  For information and reservations call 216-687-0074 or go to http://www.convergence-continuum.org/

Next up at con-con:  Israel Horowitz’s “Spared,” a one-person show performed by Robert Hawkes, from September 28 through 30, 2017.  It is followed by Siegmund Fuchs’ “In The Closet” from October 13-November 4. 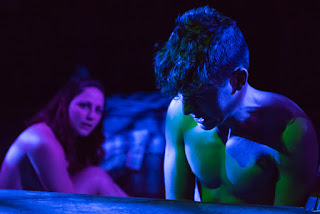 In the early 1970s, master wordsmith and playwright Peter Shaffer read a small news story, with little details, about a boy who had blinded six horses at a stable in Sussex, England.  The writer’s imagination went into full gear.  He created a script which included a family background for the obsessed young man, an image of a troubled but successful psychiatrist, and wove them into a compelling play which he named “Equus.”

The story centers on Alan Strong (Antonio DeJesus), a teenager, living in a small town in England and Martin Dysart (Russell B. Kunz), the psychiatrist who treats him after Heather Saloman (Amiee Collier), a compassionate magistrate, pleads with Dysart to take Alan as a patient.

From the opening scene, in which Alan tenderly hugs Nugget, a horse, to the emotional closing, Shaffer’s two-and-a-half-hour script grabs and holds the viewer’s attention.

With Dysart as the narrator, we meet Frank (Andrew Narten), Alan’s atheistic, hypercritical father, and Dora (Claudia Esposito), his enabling school teacher mother.  We learn how Jill Mason (Sarah Blubaugh), a young woman introduces him to stable owner Harry Dalton (Chris Bizub) who hires the boy.  We observe as Jill attempts to introduce the virgin boy to sex.  We observe Alan connect to the stable’s horses (Daryl Kelley, Jason Falkofsky, Zac Hudak, Evan Martin, Anthony Salatino and David Turner), who Alan loves, yet is the subject of his maiming.

We observe Alan change from a boy who chants advertising jingles in order to protect himself from human contact, to revealing a little of his past, to finally coming to an understanding of why he acted as he did, with the possibility of his becoming normal.  “Normal.”  Whatever that means.

Alan is not the only one with high angst.  Dysart is in a loveless, sexless marriage, is living an unfulfilled existence, and finds himself having severe nightmares about being a destructive chief priest in Homeric Greece.

The tale is told in retrospect. Dysart, as the narrator, takes the audience to various times and places as fits the tale, rather than making the story sequential.

“Equus” is a tale of passion, religion, sexuality, pain, blame, and freedom.  Alan, a boy in pain, is obsessed with horses from first coming in contact with one on a beach when he was young.  He creates Equus into a Christ-like figure.  Even his first attempt at sex takes place in his “church,” the horse stable, where he is unable to perform when the horses whinny, sending a message of his wrong doing.   Dysart, as does the audience, tries to figure out if Alan’s problems, including his need for freedom, are his own doing or those created by his parents, and whether he is freeing the horses from their confinement and pain by blinding them.

“Equus” is a difficult play to stage.  For the script to work requires two superb actors, a strong supporting cast, creative staging, a meaningful vision for the horses, subtle and appropriate English accents, and a set that enhances the action.

Fortunately, director Patrick Ciamacco has found the cast and has the originality gene to make the near impossible possible.

At an open tryout, Ciamacco found boyish looking twenty-year old Antonio DeJesus.  DeJesus lives up to the English interpretation of his last name, which is “of God,” as Alan. DeJesus gives what has to be one of the most enveloping, highly-textured performances by a male the local theater season.  Kudos!  Bravo!

Russell B. Kunz creates a believable, well-conceived, tortured Martin Dysart.  He is a great match for DeJesus.

Noah Hrebek and Patrick Ciamacco’s horse fabrications, and Ciamacco’s set design, which takes us into a barn, complete with Alan’s pit of Hell, enhances the production.

Be aware that the production includes full frontal male and female nudity.

CAPSULE JUDGMENT: “Equus” is not only one of Blank Canvas’s finest productions, but one of the best stagings of the script I’ve seen.  This is required attendance for anyone interested in experiences of marrying a well-written script with a superb staging.  If for no other reason, go to the theater to experience the marvel of Antonio DeJesus.

Blank Canvas’s “Equus” runs through August 26, 2017, in its near west side theatre, 1305 West 78th Street, Suite 211, Cleveland.  Get directions to the theatre on the website. Once you arrive at the site, go around the first building to find the entrance and then follow the signs to the second floor acting space.  For tickets and directions go to www.blankcanvastheatre.com

Next up at BC is their annual fund-raiser on September 1 and 2. “Chess,” is a concert version of the tale of a politically driven, Cold War-era chess tournament between two men—an American grandmaster and a Soviet grandmaster—and their fight over a woman who manages one and falls in love with the other.  It has music by Benny Anderson and Björn Ulvaeus of Abba, and lyrics by Tim Rice.

October 6-28:  The stage version of the cult-rock movie “The Rocky Horror Show.”
Posted by Roy Berko at 9:34 PM 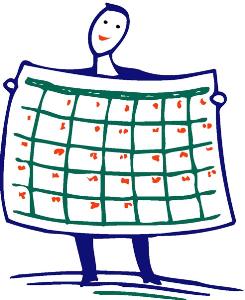 Here’s a list of some of the offerings of local theatres through the fall season (September-December, 2017).

September 15 – October 8
ONE FLEW OVER THE CUCKOO’S NEST--“Crazy” McMurphy, a charming rogue, is placed in a ward at a mental institution ruled by the terrible Nurse Ratched.  It’s a battle of wills!

October 6 – November 5
WAITING FOR GODOT—Beckett’s Existential epic “mystery wrapped in an enigma” which examines the hopeless destiny of the human race. Especially significant in this “reign of Trump.”

December 1 – December 31
Disney’s THE LITTLE MERMAID—A return visit of the 2016 award winning production tells the timeless fairy tale of Ariel, a mermaid princess, as she dreams of the forbidden land above.

December 1-16
URINETOWN THE MUSICAL—In a Gotham-like city, a terrible water shortage causes the government to enforce a ban on private toilets.  Watch in delight as this musical satire exposes social irresponsibility, bureaucracy, corporate mismanagement and capitalism at its worst.

October 21-November 19
THE DIARY OF ANNE FRANK—Anne’s compelling words come alive and urge viewers to stand up for one another in the face of intolerance, fear, and hate.

November 24-December 23
A CHRISTMAS STORY—Yes, it’s back again…one boy, one holiday wish, The Old Man, Santa at Higbee’s Department Store and the glowing-leg-lamp.  A play for the whole family.

September 9
PANDEMONIUM 2017:  UNLEASH—CPT’S annual fundraiser transforms the CPT campus into a labyrinth of theatre, dance visual and performance art on every corner.

October 26-28 & November 2 (previews), November 3-18 (official run)
THE ART OF LONGING--World premiere of Lisa Lanford’s play that follows the lives of six “third-shift” people who are awake when the rest of the city sleeps.

November 24-26 & 30 (previews), December 1-17 (official run)—
THE LOUSH SISTERS GET HARD FOR THE HOLIDAYS (YIPPIE-KAI-YAY MOTHER LOUSHERS)-- Holly and Jolly Loush return to CPT in this world premiere of a bawdy, boozy, over-the-top holiday cabaret in which they battle villains and attempt to avert disaster.