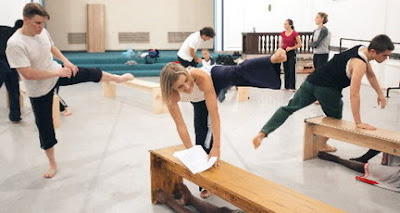 The night was warm with little humidity, the crowd was large, the setting perfect for an encompassing evening of dance. Verb Ballets presented its annual Cain Park program on August 6. The evening, which was populated by several world premieres and some reprisals of audience favorites, showcased both the strengths and weaknesses of Cleveland’s National Repertory Dance Company.

Program highlights included ‘TO HAVE AND TO HOLD,’ a 1989 piece, which was getting its 2010-2011 season company premiere. It was choreographed by Daniel Shapiro and Joanie Smith to the music of Scott Killian. The gymnastic piece, which was performed with the dancers moving on, over, beneath and beside a series of benches, included the entwining of bodies in vertical and horizontal interactions. The visual impact was excitement and wonder at the agility and daring of the dancers who often risked life and limb while performing the complicated moves.

Another audience pleaser was the well performed and conceived ‘AMBIGUOUS DRIVES’ in its world premiere. Choreographed creatively by Tommie-Waheed Evans, to the music of Greg Smith, the whirling dervish of movements fit the erratic sounds. The production was highlighted by outstanding performances by Katie Gnagy and Erin Conway Lewis.

‘THE FIDDLER,’ well performed to the Klemzer music of Samuel Matlowski, is a short piece based on stories by Sholem Aleichem, the Jewish Mark Twain, who mirrored his creations on life in the shettels (villages) of Eastern Europe. As is often pictured in the paintings of painter Marc Chagall, the fiddler represents Jewish tradition. Brian Murphy competently enacted the fiddler, who like the Jews in the Diaspora, are bent, but don’t break. Katie Gnagy as the mother and Erin Conway Lewis, as the daughter, were also excellent.

‘TARENTELLA,’ another season company premiere, was in need of dynamics. The Tarantella, a joyous Italian folk dance need to be exciting, filled with joy. Stephanie Krise sparkled, but Gary Lenington tromped around, unsmiling, creating the wrong visual and aesthetic illusion.

‘WINGS AND AIRES,’ the opening number, featured eye catching red costumes and many ill timed movements. The male corps was consistently out of step with each other. The highlight of the number was the second movement, nicely danced by Erin Conway Lewis and Brian Murphy.

‘CLICKS Crew,’ choreographed by Annalee Traylor, was an opportunity to showcase Verb’s Creative Liaisons Inspiring Cleveland’s Kids, a summer training program to engage teenagers interested in pursuing a career in dance. A combination of break dancing, modern movements and traditional ballet, it served its purpose of giving the kids a chance to show their skills.

The Cain Park program proved what has been known for some time. Verbs has a strong female corps, but is in desperate need of new male dancers. Except for Brian Murphy, none of the present group of male dancers is up to the task of dancing major roles or, in some cases, of displaying the concentration and skills needed to create sync in group movements. Though, at times Antwon Duncan, as he displayed in ‘TO HAVE AND TO HOLD’ can dance solo, he was consistently out of step when forced to coordinate movements with others. Lloyd Boyd Amir III just doesn’t have the training and control to be in a major company. Gary Lenington appears to be past his prime, often dancing flat footed. Why doesn’t Verb go on a search to find quality males? They are out there, they just have to be sought out.

Capsule judgement: VERB BALLETS’ Cain Park program had many highlights, but desperately needs to shore up its male dance corps.
Posted by Roy Berko at 8:42 PM