Halle’s 'DREAMCOAT' aimed at the kids and their parents

Every production of 'JOSEPH AND HIS TECHNICOLOR DREAMCOAT' is uniquely. Because it is a series of songs, with no script or stage directions, each director does his or her own thing. I’ve seen the show at least 15 times and I’ve never seen the same concept.

Years ago Beck Center did a smashing professional-level adult-centered production starring local actor/director Rob Gibb. Playhouse Square brought in a professional production several years ago that was so outstanding that it made the Biblical story glisten. Last year Berea Summer Theatre did a production which starred the always terrific Craig Recko as Joseph. Now, the Halle Theatre has taken its turn.

Director Jacqi Loewy decided to make her production kid-oriented. It is short, has some nice gimmicks, incorporates a large children’s chorus, and is aimed at the parents and grandparents of the children in the cast and the less-sophisticated theatre goer. My five and six -year old grandson's (Alex and Noah Berko) laughed when the brothers turned their “butts” toward the audience and for some odd reason found the prison scene to be “fun.” Go figure!

Andrew Kay sings well and makes an acceptable Joseph. Sheri Levy Gross, portraying the Narrator, has a nice voice. Tom Wang’s Pharaoh needed more abandonment in his Elvis imitation. The very talented Greg Violand seemed wasted with the minor roles of Jacob and Potiphar. The kids chorus sings well and are kids...how bad can that be?

Don’t go to see this production expecting anything close to a polished show. Take your kids, enjoy the wonderful music and expose them to the theatre. It’s family theatre. No one even minded the exits for “potty” breaks by some younger audience members or the kid who wandered the aisles for most of the production.

Capsule judgement: As a cute blue-haired elderly lady sitting next to me said as we exited, “It’s a nice show.”
Posted by Roy Berko at 5:07 PM

Every once in while a theatre-goer has an experience that makes all future exposures pale by comparison. Sometimes its seeing a single performance: Richard Kiley in 'MAN OF LA MANCHA,' Zero Mostel in 'FIDDLER ON THE ROOF' or Barbara Steisand in 'FUNNY GIRL.' Sometimes it’s a total production that blows the mind, such as the Broadway versions of 'WHO’S AFRAID OF VIRGINIA WOOLF,' 'CHORUS LINE,' or 'WEST SIDE STORY.'

Such an experience was the Cleveland area production of 'JACQUES BREL IS ALIVE AND WELL AND LIVING IN PARIS' many years ago which started in the little theatre at Berea Summer Theatre, moved to Playhouse Square before the theatres were all renovated, and held the record for the longest continuous run of any production until it was recently eclipsed by 'TONY N’ TINA’S WEDDING.' That show, which starred Cliff Bemis, David Frazier, Providence Hollandar and Terri Pieto and was directed by Joe Garry, with musical direction by David Gooding, was an unmatchable experience. I once heard someone describe that show’s rendition of “If We Only Have Love,” the show’s final selection, as making her “toe nails curl.”

The memory lingers on. It was with that mind set that I attended Actors’ Summit’s production of Jacques Brel. It doesn’t match up. This is not to say that the present production is bad, it’s not. It is quite enjoyable as evidenced by the extended applause at the curtain call. It’s just that this rendition does not have the emotional depth, the perfect blending of voices, the seamlessly smooth staging, and the full musical sound of Cleveland’s classic production.

'JACQUES BREL IS ALIVE AND WELL AND LIVING IN PARIS' is not the typical musical review. The cast can’t just sing, dance, and go on to the next song. Jacques Brel was a poet and singer. But, most of all, he was a song writer whose creations each told a story with a beginning, middle and end. He told tales of life, death, relationships, war, class struggle, loneliness and love.

In presenting Brel’s work each piece stands alone. Each piece has an attitude, a tone, a purposefulness. It is here that the Actors’ Summit proeduction lacks. Songs are sung. Most are not experienced by the performers and, therefore, not experienced totally by the audience.

The strongest renditions are “Fanette” powerfully sung by Scott Plate, “Next” by Plate and the ensemble, and “Carousel” by Sally Groth and the ensemble, though the necessary emotional enchantment in the latter was somewhat missing. There are special touches in this show. In “The Girls and the Dogs,” Plate and Wayne Turney are accompanied on stage by two adorable and well-trained dogs who beg, heel and exit on cue. Turney has a wonderful time in “Funeral Tango.”

The cast gives their all. Plate has a big voice, which sometimes causes problems as the other voices are much more subtle and he sometimes drowns out the other performers. Sally Groth sings well, but is somewhat shallow in the upper registers, especially in the song, “Alone.” MaryJo Alexander has a pleasant if not commanding sound. Turney does best in songs where he can clown.

Capsule judgement: All in all, 'JACQUES BREL IS ALIVE AND WELL AND LIVING IN PARIS' at Actors’ Summit is a serviceable show that audience members should enjoy. And, obviously they have, and have spread the word , as the show has been extended for another three weeks.
Posted by Roy Berko at 5:00 PM 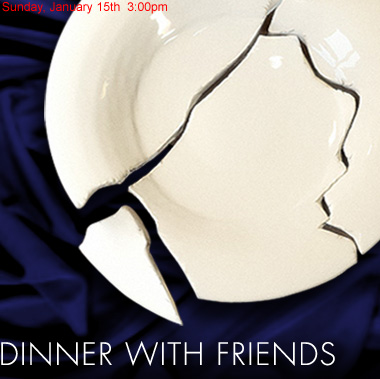 Donald Margulies, the author of 'DINNER WITH FRIENDS,' now receiving its Ohio premiere at The Cleveland Play House, received a 2000 Pulitzer Prize. The play also garnered the American Theatre Critics Association New Play Award and the
Dramatists Guild Award. Anyone seeing the play will understand why.

Margulies writes plays that probe how people treat each other and how we deal with the inevitable losses in our lives. In 'DINNER WITH FRIENDS' he digs deeply into relationships, families and marriage in his comedy-tinged drama. Margulies lays bare feelings, loyalties, personal values and self concepts. This is not a feel-good play, it is a mind blowing experience. It would be nearly impossible for an audience member to leave the theatre without probing personal attachments.

'DINNER WITH FRIENDS' allows us to peek in on the lives of four long-time friends. Karen and Gabe are international food critics. Beth is an artist who is married to Tom, a lawyer. We share an evening when Beth announces to Karen and Gabe that Tom is leaving her for another woman. We later hear Tom's side of the story. A flashback scene shares the first meeting of Tom and Beth at Karen and Gabe's summer home. Flashes forward allow us to further examine the two couple's relationship now that one is divorced and the other starts to examine their lives together.

The CPH production doesn't always live up to the potential of the script. Director Seth Gordon has allowed his actors to generally graze the surface of their roles. Though this is enough to involve the audience, as evidenced by the sustained laughter and curtain call applause, he did not pull out all the emotional levels of each character. This was especially true with Kate Hodge's interpretation of Beth. Making her first appearance on a stage, Hodge displayed mannerisms more appropriate to the television screen. Her movements were repetitive, her character never seemed to feel the pain. Wayne Maugans as Tom fared better, but, again, acted out rather than reacted to his internal pain, leaving us adrift as to his real sincerity. A script line summarizes his characterization: "Stuff coming out of his mouth is like bad greeting
cards."

Susan Ericksen fairs better as Karen. By far the best performance is that of David Colacci whose frustrations, feelings and deep hurt and questioning are clear throughout.

Kent Dorsey's set design is outstanding. Housed on a turntable, we are exposed to a kitchen, bedroom, living room, summer house, bar and another bedroom. All are realistic and add dimension to the production.

Capsule judgement: DINNER WITH FRIENDS is an emotional experience. It is the kind of play that stays with a viewer long after the curtain falls. It's a wonderful way for the theatre to end what has been a satisfying season.
Posted by Roy Berko at 10:18 PM