"Beyond the Horizon," seldom seen classic at Ensemble 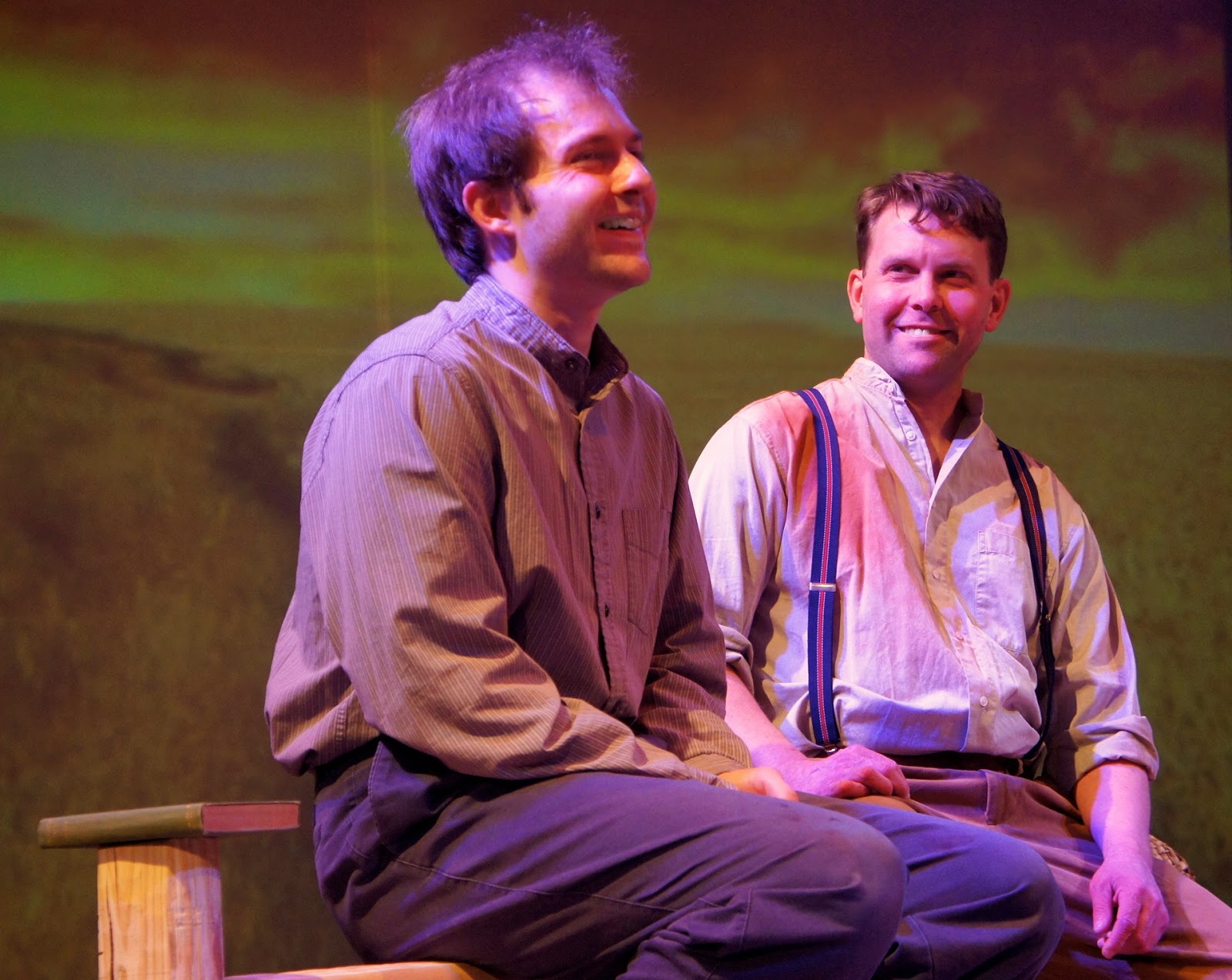 Each year, Ensemble Theatre selects a classic play to be part of their season offerings.  Last year it was “The Iceman Cometh,” which was recognized by the Cleveland Critics Circle for Superior Achievement for a Non-Musical Production.  This year’s choice is Eugene O’Neill’s 1920 Pulitzer Prize winning, “Beyond the Horizon,” the author’s first full-length work.

A review of the first staging of “Beyond the Horizon” called the play “the closest approach any native author has yet made to the great American play.”  O’Neill’s epic gave birth to the play category of “new American tragedy.”

Ironically, the playwright used a take-off on the romantic story line to achieve his goal.  It was probably the formulaic romantic story line that led an opening night reviewer to write, "There can be no question that it is a work of uncommon merit and definite ability, distinguished by general superiority from the great bulk of contemporaneous productions. However, the play ‘is not quite a masterpiece.’”

The play centers on a slowly evolving portrait of the Mayo family.  Andrew and Robert are bound by brotherly love, but are totally different.  One is a pragmatist, the other a dreamer.   The brothers fall in love with the same girl.  Both wind up sacrificing what they really want out of life in order to do what they think may be better for the other, and, in the end, both lose out.

“Beyond the Horizon” is a play about dreams.  Every character has clearly etched desires.  The father, James, wants a bigger farm with his older son accomplishing his vision.  Ruth yearns to have a husband.  Robert and Andy have opposite dreams.  Andrew wants to accomplish his father’s goal.  Robert, a poet and reader, envisions himself living out his romantic dreams of going “beyond the horizon,” going to “the far places of the world that beckon alluringly.”

The script effectively walks the fine line between melodrama and prescription romantic saga.  In lesser hands the plot probably would have strayed from reality and into romantic fantasy.  But, fortunately, O’Neill is too proficient a writer to allow for that.

The script follows the format of a three-act play, so popular in the early to mid-twentieth century.  It makes for a long, over two-hour sit.

Ensemble’s production, under the direction of Celeste Consentino, develops the playwright’s intentions.  The pacing is languid, maybe a little too languid in places.  Tensions don’t always build to their climax. The acting mainly stays on the surface, actors not digging deeply beneath the surface level of the thoughts and feelings of their characters, a digging that often unearths deep pain and emotional feelings that aids the performer to illuminate the person they are portraying.

James Rankin generally gives a nice poetic dreamer quality to Robert.  His closing scenes are properly wrought with pain and the letting go of any hope for the life he dreamed he’d live.

The technical aspects are unnerving.  Large electronic projections of fields and a house interior visually overwhelm in the small Ensemble venue.  The pictures of Mary, the young daughter, many times larger than an actual child, with an overpowering voice, makes the youngster surreal.  That might have been fine for horror movie,  but this is a realistic play.

Capsule judgment:  “Beyond The Horizon” is a Eugene O’Neill classic which gets few stagings.  The Ensemble production, in general, allows us to experience the beautiful writing of a master playwright. Ensemble is to be praised for continuing in its task to help keep the classics alive by producing this and other epic plays.

To read the views of other Cleveland area theatre reviewers go to:  clevelandtheaterreviews.com
Posted by Roy Berko at 10:55 AM

If you were carrying a genetic factor that, in the future, doomed you with Alzheimer’s, cancer, or some other disease, even if science didn’t have a cure for the ailment, would you want to know it?   Would you be willing to allow your blood, bone marrow, or a tissue sample, to be used in scientific experiments to determine genetic possibilities?   What is an experimental scientist’s obligation to reveal what they will do with the information gained from the consent of volunteers in a medical study?

Sound like subjects right out of tales that are popping up daily in our newspaper?   Those probes are the foundation of “Informed Consent,” now on stage at the Cleveland Play House as part of the New Ground Festival.”

Plays by Deborah Zoe Laufer, the author of “Informed Consent,” recipient of the Helen Merrill Playwriting Award and a Lilly Award, have been called, “rapturously funny,” “poignantly redemptive,” “hilarious,” “engaging,” “funny as hell,” “touching,” and “weird and illuminating.”

Her “End Days,” which is receiving a staged reading by Interplay Jewish Theatre (http://interplaycleveland.com), as does “Informed Consent,” rips its topic out of the headlines.  The playwright exposes a dysfunctional family caught, in the aftermath of 911 attack, that is  trying to survive in a world hurtling toward Armageddon.  Only Stephen Hawking or Jesus can save them.

“Informed Consent,” like “End Days,” is a black comedy which centers on Gillian, an ambitious geneticist, who anxiously takes on a project to investigate why a Native American tribe is being devastated by diabetes.  Since diabetes is not her major interest, and also she wants to use the blood samples to probe into the genetic component of Alzheimer’s, her motives are not altruistic.  Her mother and other relatives have been the victims of the mind-ravaging illness and she would like to find a cure, not only for others, but to help herself and her daughter, who may also carry the errant gene that she suspects is the culprit. What to do?

Sound like a downer?  Not with the fertile imagination of Laufer.  The audience finds themselves in a conundrum of whether to laugh or cry, often doing both.

Is truth more interesting than fiction?  “Informed Consent” is based on a real event.  It takes on conflicts between cultural patterns, the roles of science and religion, the obligation of researchers to do their work with the weight of  governmental and university constraints.  The tale asks, among other questions, “just how much knowledge is too much?”

The Cleveland Play House production, under the insightful direction of Sean Daniels, is excellent.  The ninety-minute play, presented without an intermission, holds the audience with excellent pacing and allows the fine writing to develop both the drama and the comedy.

Jessica Wortham is superb as the scientist.  She creates a completely believable woman caught in a conflict between her obligation to the scientific process and protocol, self and child survival, and the need to be truthful, as well as her respect for cultural beliefs.

The rest of the cast, all of whom play various roles, Fajer Al-Kaisi, Larissa FastHorse, Gilbert Cruz, and Tina Fabrique, all are excellent, balancing the fine line between humor and drama with ease.  They get the laughs by playing real people, not caricatures.  What a wonderful assemblage of professionals.

CAPSULE JUDGMENT:  “Informed Consent” is a play for all theater-goers.  There is intellectual interest, mystery content, and humor, all rolled into one well-written script, which gets a superb staging!  This is a must see production! 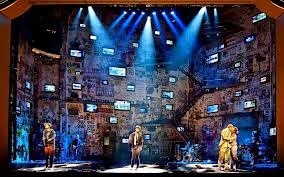 In 1968 “Hair,” dubbed the American Tribal Love-Rock musical, exploded on Broadway.  It shocked the nation, but gave an accurate picture of a world rocked with chaos.  The Vietnam war raged, the peace movement flourished, draft cards were burned, rebellion against traditional values exploded.  ”Drugs, sex and rock and roll” became the mantra of the day and were clearly exposed on stage.  The show’s book was strong and the score was filled with top ten hits including “Aquarius,”  “Good Morning Starshine,” “I Believe in Love,” and “Where Do I Go?”  It became the seminal musical theatre offering illustrating “theater representing the era from which it comes.”

In 1996 RENT, opened on Broadway.  The rock musical, aimed at the MTV generation, was a reflection of the era’s turn of the century dilemmas including HIV/AIDS, regentrification, the coarseness of a nation torn apart by political turmoil, and the emerging gay pride movement.  It had a strong story, identifiable characters, and contained such mega musical hits as, “Light My Candle,” “Life Support,” “Another Day,” “Your Eyes,” “Santa Fe,” and “Seasons of Love.”  It is considered to be the seminal musical theatrical work for entering into 21st century America.

Green Day, Billie Joe Armstrong and Michael Mayer, who created “American Idiot,” seemingly tried to duplicate the success of “Hair” and “Rent” in reflecting the societal image of the mid-2010s by creating a musical based on high-octane rock guitar riffs, vigorous singing and dancing, and what they term “an evergreen narrative of teen rage, love and loss.”

Unfortunately, their creation, though it works on some levels, does not have the story line depth, the quality of music, and the stage presence of “Hair” or “Rent.”

The show is an adaptation of the concept album “American Idiot” by punk rock band, Green Day.

The show opened on Broadway in April of 2010 and ran for a year, marking up 422 performances.

A road tour version of “American Idiot” is running at the Palace theatre for an abbreviated four performance run.

The musical is filled with energy, but the wafer thin story lacks emotional depth.  There is little to grab and hold the audience’s imagination.  In contrast to “Hair” and “Rent,” it is difficult to feel empathy or attachment for any of the characters.

Though the show’s album won a Grammy, there isn’t a standout song.  In fact, after a while, all the songs sound somewhat alike….loud and guitar heavy.

The choreography, though filled with high level energy, is repetitious and helps little in developing the story.

The tale takes place “in the recent past,” and concerns three guy friends who plan to escape their suburban “wasteland.”  As they are about to part, one (Will)  finds out that his girl friend (Heather) is pregnant.  He decides to stay home, leaving the other two to go on their way.

Life in the “big city” doesn’t turn out to be what the boys expected.  One (Johnny) wanders down the road to drug addiction (supplied by the snarly St. Jimmy) and sexual depravity (with Whatsername).  The other (Tunny) enlists in the army and goes off to fight in the much hated Iraqi war.   Tunny loses a leg, but falls in love with his nurse (The Extraordinary Girl).  Eventually, Johnny recognizes the error of his ways and returns to suburbia, as does Tunny and his love.  (Oh, yes, the plot is thin.)

The cast of the touring production is excellent, especially considering the group has little to no professional experience.   They are recent college grads who are displaying their talents in their hopeful march to fame and fortune.

As was the case on Broadway, the set and lighting are outstanding.

Capsule judgment:  “Green Day’s American Idiot” is a loud, brash musical which attempts to tell the tale of modern day America.   In spite of a well-performed and musically proficient  performance, the thin script and redundant musical sounds resulted in a quickly to be forgotten theatrical experience.

“American Idiot,” a part of the US Bank Star Performance Series, run at the Palace Theatre form April 25th through the 27th, 2014.
Posted by Roy Berko at 11:55 AM