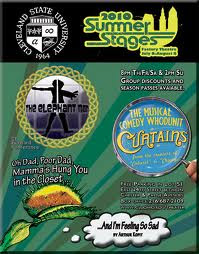 'ELEPHANT MAN' and 'CURTAINS' at CSU

‘THE ELEPHANT MAN’ gets acceptable production at 2010 Summer Stages

‘THE ELEPHANT MAN’ is a 1977 play by Bernard Pomerance. It centers on John Merrick, an Englishman with severe deformities who was exhibited as a human curiosity. Because of his thick and lumpy skin, enlarged lips, and heavy legs, he was nicknamed The Elephant Man.

Merrick became well known in London society after he went to live at the London Hospital after being removed from a freak show.

The play opened on Broadway in 1979 after being produced in London.

One of the staging difficulties of the script is Pomerance’s insistence that no prosthetic makeup be used on the actor portraying Merrick. The actor must, before the eyes of the audience, transform himself into a twisted grotesque being with malformed face and body.

The CSU 2010 Summer Stages production, under the direction of Everett Quinton, is acceptable. This is a difficult show to stage. Not only must the lead actor transform himself, but he must keep in physical character throughout. Because the play does not contain much physical action, concentrated pacing and clear characterizations need to be developed. In addition, the setting is England, so consistent British accents must be maintained throughout. As is, the pacing dragged in parts and the cello interludes, which were effective at the start became tedious after a while. The accents came and went.

Eric Perusek did a nice transition into the ill-formed Merrick and generally held it through out the play. The changeover to his being “normal” would have been helped by his being difficult to understand at the beginning and then improving. Ursula Cataan was excellent as Mrs. Kendall, who became Merrick’s friend and tutor, and Geoff Knox did a nice job as Frederick, Merrick’s doctor.

CAPSULE JUDGEMENT: ‘THE ELEPHANT MAN’ got an acceptable production, but would have been improved by a faster pace and some attention to the development of clearer characterizations by some of the cast.

‘CURTAINS,' the musical that CSU’s 2010 Summer Stages chose to present, was probably DOA (dead on arrival) at the Factory Theatre. Peter Stone, who wrote the original book, died just before the play opened leaving it unfinished. Fred Ebb, who wrote the lyrics, also died before the musical was completed. So, is it a coincidence that the ridiculous piece was a disaster?

stated, “’CURTAINS' lies on the stage like a promisingly gaudy string of firecrackers, waiting in vain for that vital, necessary spark to set it off," "It's not so much a whodunit as a whydoit" and “A somewhat clunky, piece of entertainment."

Well, not quite a total disaster. David Hyde Pierce, who played the major role did get the Tony for his leading actor performance.

The story centers on a detective who is called in when the untalented leading actress is killed on the opening night of ‘ROBBIN' HOOD OF THE OLD WEST.’ The play within the play is a western musical. The detective, who is an amateur actor “saves the show” with some “spiffy” suggestions, falls in love, and catches the killer. The entire production is filled with unmemorable music including, “In the Same Boat 1,” “In the Same Boat 2,”“In the Same Boat Completed,” “Coffee Shop Nights,” “Kansasland,” and “The Woman’s Dead.”

Under the direction of Michael Mauldin, CSU’s production stumbles along. It is poorly paced, few songs are well interpreted, the acting is generally flat, actors stand in straight lines often having to duck out behind other performers in order to say their lines. Even Martin Céspedes, the crown prince of local choreographers, couldn’t save this debacle. He tried hard, but the cast wasn’t up to carrying out the movements.

Jessica Duer as Nicki, who adorably looks like she is right out of a 1920s musical, and Jean Kauffman as the comedic producer, do themselves proud. Most of the rest of the cast have problems with inconsistent accents, weak singing, and weak character development.