...OR DOES IT EXPLODE? @ Cleveland Public Theatre 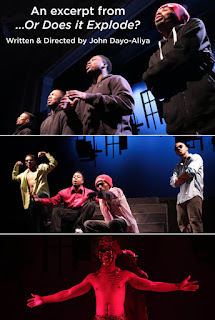 In this age of Black Lives Matter movement and other civil rights unrest, a performance piece such as, …OR DOES IT EXPLODE?, is both relevant and fulfills the obligation of the arts to produce works that reflect that era from which is comes.

A theatrical piece, which uses poetry, prose and other contemporary theatre forms, the script explores questions of what it means to be Black, male, and young in 21st century America.

Written by John Dayo-Aliya, an Akron based Kent State University graduate, playwright, actor, and musician, the piece reflects the author’s writing goal of exploring various aspects of the Black experience.  He looks at “modern Black lives and the questions arising out of the challenge of holding on to faith, love, community, and familial ties while living against a backdrop of structural racism.”

He aims to “provoke audiences to call out to their higher humanity in order to face social and cultural issues with intelligence, clarity, and empathy.”

The piece, which is performed in a Zoom format, features Austin Sasser, Benjamin Black, De Andre Hairston-Karim, & Dar'Jon Bentley.  Each of them gives portrayals of the anger, hurt and joy of real reactions of age 16 to 35 Akron Black men in order to “display social conditions and contradictions, and what it means to do justice to one another.”

Some of the language, including excessive use of the “N” word and profanities, are often difficult to listen to, especially for those not used to the “in your face” words and vocal styles of the young men.  That direct startling directness is part of the purpose of the piece.  If not for this confrontative manner, the message would not be presented, the effect sanitized and watered down.

If presented in a theater, the words and ideas would probably have evoked vocal reaction from audience members, much like the words of preachers and speakers do with African American audiences.   Unfortunately, with that missing element, some of the emotional effect is lost watching in a home environment on an electronic device.

The mechanics of the presentation also cause problems as the microphones, and the physical settings of the actors, are uneven, sometimes causing words to be lost and images to be blurred and out of focus.  Whatever, the anger, frustration and powerlessness of the speakers is clear.

Several vignettes stand out.  Among them is one that centers on the ridiculousness of the academic community, usually researchers who are white men, who analyze Black young men as if they are lab animals, making pronouncements that are irrelevant to the subjects they are trying to describe.

Another talks about television shows that don’t reflect the real lives and experiences of Black youth, but models for them a type of fake reality, that they can never achieve or characterizations that make fun of or demonize them.

$10 dollars an hour is the pay afforded by the “good” jobs available to these men who are often castigated because they aren’t interested in taking those jobs.  The piece asks, in reality, what can be purchased with that less than $500 a week, minus taxes, health care, and the cost of getting to work?

Capsule judgment:  The script and the performances were often compelling, sometimes off-putting, and will offend some and empower others.  Both the script and the performances are uneven in their clarity and professionalism.  With that said, ...Or Does it Explode? Is well worth the time watching…it is an eye opening experience, especially for those who are not part of the community who are unaware of the motivations behind Black Lives Matter.

Tickets:  suggested donation $1 to $99. Patrons must use Zoom to see this work and will receive an email 1-2 hours before showtime with the meeting login information. Please note online sales for each performance will close at 5:00pm (ET).  TICKETS