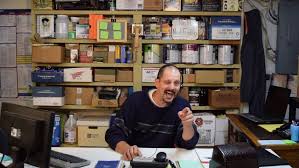 Becky Mode, the co-creator of Fully Committed, the one-person play which was selected by Time Magazine as one of the top plays of 2000, is a producer, actor and playwright.  The play’s co-creator, Mark Setlock, is a native Clevelander and graduate of Kent State, who won the 2000 Outer Critics Circle Award for his solo performance in the off-Broadway production of their script.

The show, which is now being streamed by Beck Center, under the direction of Scott Spence, was reviewed as being “…immensely entertaining, “…hilarious and touching, gallops along at a swift, almost frantic pace,” “…[a] sparkling one-man tour de force…very funny and very believable…” in its New York run.

Besides the original production, the script is noted for starring Jesse Tyler Ferguson, of Modern Family fame, in a 2016 off-Broadway revival.  Ferguson was awarded a Drama Desk Award for his Solo Performance.

Fully Committed centers on the life of Sam Peliczowki, an out-of-work actor who has trouble getting roles for which he auditions. As a result, he is forced to take the stressful job as a Reservationist in a top-tier Manhattan restaurant.

We watch as Sam gets harassed by his coworkers, management, and numerous customers.  Life is made even more frustrating by the success of his friend who keeps getting cast in commercials and plays and the pressure put on him by his recently widowed father for him to come visit.

The show is a wonderful acting challenge as the solo performer has to create forty wildly diverse characters, complete with differenct accents, genders, personalities and idiosyncrasies, as well as memorizing hundreds of lines.

Nick Koesters, who has had a 25-year relationship with Beck Center, including performances in such shows as Hair, The Greater Tuna, and Is He Dead?, is more than capable of handling the roll.  Koesters gives an award-winning performance.

He faithfully creates the threats, bribes, coercion, and histrionics of the desperate callers who will stop at nothing to get prime reservations and the right table, but he perfectly displays the angst of doing a job he doesn’t want, but has to have to pay the bills.

Capsule judgment: A funny one-man show, Fully Committed, which leaves the viewer exhausted from Koester’s near frenetic un-hinged tour-de-force performance. It is a wonderful way to spend an hour getting away from pandemic stress and the world of angst.

FULLY COMMITTED runs November 13-29, 2020 (once you start the virtual production you have 48 hours to complete it).  Patrons are invited to enjoy this virtual production in the comfort of their homes for $20 for an individual viewer, $30 for two or more viewers and $40 for two or more viewers who want to donate $10 for additional support to the Beck Center.