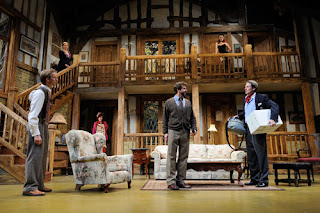 ‘NOISES OFF’ at Cleveland Play House is entertaining, but…

‘NOISES OFF,’ now on stage at the Cleveland Play House, is a farce. In fact, it is considered to be one of the best written of the modern farces.

A farce, as the CPH program states, is “a comic dramatic work using buffoonery and horseplay, typically including crude characterizations and ludicrously improbably situations.” As anyone who has ever attempted to direct or act in a farce knows, it is hard work. It is probably the most difficult of theatrical formats to do well.

Though they try hard, the cast and director of ‘NOISES OFF’ just don’t get it totally right. Not that the production is bad, it’s not, it is quite entertaining. But it is not of the quality, for example, of the great production I saw in London of this show.

Maybe seeing a British play requires the British to do it. The accents, the natural over-exaggeration, the bigger than life characters, need that special Anglo touch.

The original staging opened in 1982 in London to rave reviews. A version of it opened in New York in 1983, starring Dorothy Loudon. It had moderate success, running 553 performances. A film version was made with Carol Burnett, Michael Caine, Christopher Reeve and John Ritter. Good cast, bad flick. A well respected critic wrote that the film was "one of the worst ever made."

The plot to ‘NOISES OFF’ centers on a play within a play. The fictional ‘NOTHING ON’ is a sex comedy which finds the cast often running around in their underwear, running in and out of doors, with no real purpose.

The ‘NOISES OFF’ segment finds us viewing three acts. The first, a rehearsal the night before opening with the cast still fumbling with entrances and exits, missed cues, misspoken lines, and bothersome props, most notably several plates of sardines.

Act Two portrays a performance one month later which reveals the deteriorating personal relationships among the cast that have led to offstage shenanigans and onstage bedlam.

In Act Three, we see a performance near the end of the ten-week run, when personal friction has continued to increase and everyone is bored and anxious to be done with the play. It contains one of the most delightful death-defying down-the-stairs falls you’ll ever see.

Much of the comedy should emerge from prat falls and general on and off-stage chaos. There should be a sharp contrast between players' on-stage and off-stage personalities.

The CPH version, under that direction of David Bell, tries hard for the slapstick. But, because of inconsistent pacing, some of it doesn’t work as well as possible. As for the on-stage/off-stage personalities, the cast generally fails. The personalities generally blend into one.

The play’s success depends, to a great degree on the set. Here, the CPH production shines as James Leonard Joy has created the perfect setting. In fact, the set is so effective that the audience universally sat in their seats at the set change between the second and third act. Unfortunately, after giving the viewers a taste of how the set would be altered, the curtain was dropped and the rest of the change hidden from view. Bad choice. The audience moaned and there were actually a couple of boos when the curtain closed. They wanted to see the stage hands do their thing.

Standouts in the cast are Christopher Kelly who is quite good as the mumphering Garry/Roger and Linda Kimbrough as Dotty/Mrs. Clackett, the maid.

CAPSULE JUDGMENT: The CPH production of ‘NOISES OFF’ is quite entertaining, but doesn’t reach the level of farce needed to really get the audience into a hysterical mood. As the play runs, maybe the cast will pick up the pace and separate the on-stage from the off-stage characterizations.
Posted by Roy Berko at 7:31 PM